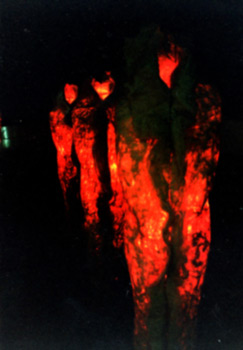 ‘…Essence consists of ten human sized headless figures. These silent sentinels, standing two-by-two in a darkened room pulsate with a rhythmic red glow. This intensely, unsettling, on and off viscera glow transforms the felt, the pseudo-epidermis of these forms into transparent veined skin. The corporeality of these forms, their palpable humanness incalculate upon our very being, in that when viewing, when standing beside these forms our breathing starts to replicate the rhythmic pulse of the “heartbeat” glow. But when the lights go out you are left momentarily in the dark with ten silent white guardians. The felt becomes dense and shroud like. The front seams read like a coat front for on each form the two front panels are joined together roughly and clumpily as if they had been grasped tightly together by some inner being to keep out a dense cold, while the collar folds regally around its imagined neck. Yet, the back seam reads like an animal’s ridge back. Is this cloak concealing some higher being or some alien form in silent waiting? Perhaps! Though, the soft cream coloured felt delineates strong human shoulders, ample thighs, womanly buttocks and the linked cupped hands appear to be covering sexual organs in that very protective of human gestures. So what does lay beneath this felted outer layer, nothingness or some universal truth? ‘

Karen Ward 2002. ( extract from a response to the work. Full text can be viewed on the George Patton Gallery web site at: www.union.unimelb.edu.au/gpg